The Hastings Fire department began in May of 1953, when twelve gentlemen formed this organization with the hopes and dreams of becoming a help and support to their fellow neighbors-in times of need. They did not start with much, in a small building on County Route 45, today known as the Hastings VFW Post #8835.

Today, July 5 2010, there are only two of the original members still with us. Anthony Cornell and Bert Keller. The stories they tell can keep you spell bound for hours. Stories of laughter and of tears. Both of good times and of sorrow.

Early in the 1974, the department expanded and built what is now home to the Hastings Fire department on US Rt. 11. The original truck, a 1927 Brockway #30344 Model J. F. and the original Hastings District School bell still remain in the fire station. The department has 2 tanker pumpers, a tanker, a grass truck and a rescue truck in service.

The department has changed quite a bit since the original members started us. We now have both men and women firefighters as well as junior firefighters. We respond to almost 200 alarms a year, many of which are rescues, unlike years ago when they mainly only responded to fires.

In the beginning the twelve Charter members took many hours trying to get the Hastings Fire Dept. up and running, the original minutes state they met at the Hastings Grange and discussed many things and planned many fund raisers to get this department up and running. In July the book records the first roll call as to who was present. These names appear in that book as being at the July meeting; John VanAlemo, Wayne Sill, George Armstrong, Wallace Cowen, Henry Kotowski, Joe Mangus, Warren Mills, Donald Rohrmann, Harold Thoman, Art Blount, W. Garlock, M. Morse, and Harold Taylor. There also was Lloyd Weaver, he never joined but they recorded him as a helper. Discussion that were recorded were to purchase equipment and hose, set up ponds for water and territory.

Below are the first recorded alarms for the Hastings Fire Department;

No. 2 - No date listed - Home on Hastings/Palermo Road next place on right past Wilbur Blount. 2nd floor fire.

No. 3 - No date listed - Grass Fire at Gould lot on Fuller Road.

On March 10, 1971 the Hastings Fire Department said goodbye to a fellow firefighter killed in the line of duty. Clyde Weaver gave his life that day fighting a structure fire and trying to save the lives of the residents. Carl Weaver also died in the line of duty on February 9, 1976 during a drill trying to better himself to help others.

Our members strive hard to continue to educate themselves as to safety. Most of our members have had CPR training and we have a fully equipped rescue truck that includes a Automatic Defibrillator. We train hard to perfect the skills needed to help serve the public in times of need. Many school hours and training hours are put into keeping the volunteer trained to do the job correctly and precise.

The department still has an active Auxiliary, consisting of both men and women who have spouses or relatives who are firefighters and those who don't have family in the department any longer but still volunteer their time to support the department and its members. We also support both the Boy Scout Troops and Girl Scout troops in the area.

There has been many activities and fund raisers over the years, such as fireman field days, Parades, Bingo, Push ball, Steak Bakes, Sportsman Banquets, Gun raffles and Bunko to name a few. The community support is unremarkable.

The department has grown from the original twelve members to just over 30 today. 5 of which are Junior firefighters between the ages of 16 and 18, our future fire department depends on them being their best. We also have many members that are interior firefighters, scene support members, fire police members, Emergency medical technicians and some that are on the Oswego County Cause and Origin team.

The ladies wasted no time beginning fund raising activities when they held their first bake sale four days later on December 11, 1953 and made a profit of $67.92. This was quite impressive for 1953. They were very ambitious and held many fund raisers to assist the fireman in their new venture and purchase equipment.

When they began participating in field day parades, they proved to be very successful and won many trophies and monetary awards.

Our gratitude and admiration to those original thirteen members for laying the ground work for our organization and to those who follow.

We, the members of the current and past Hastings Fire department and Auxiliary, want to thank all who have supported us throughout the years and we look forward to serving the community for many years to come. 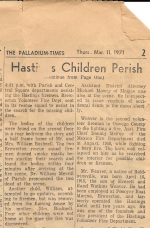 This site has been viewed 147,622 times.
Events
Pictures
Apparatus
Maintained by the members and staff of Hastings Fire Department Inc.. Designated trademarks and brands are the property of their respective owners. Copyright © 2006-2022. YourFirstDue Inc. All Rights Reserved. Content on this web site is supplied by Hastings Fire Department Inc.. YourFirstDue Inc. cannot be held responsible or liable for any content, text, pictures, or any other media found on this web site.
Management login
Powered by